DRM hopefully to be fixed in Portugal 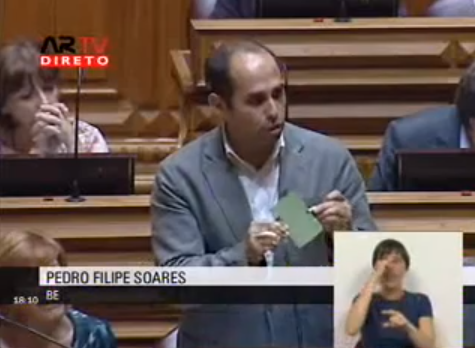 DRM bills being discussed, with a physical DRM'd book
sent by
ANSOL serving as an argument
2001's European Directive 2001/29/EC says that member states must legally protect DRM measures, making it illegal to circunvent them. But it also states that they must ensure that it doesn't prevent uses permitted thanks to copyright exceptions (for instance private copy).

The transposition of that directive to the Portuguese Law (CDADC) was made in 2004, but the way that CDADC ensures that copyright exceptions is protected doesn't work. CDADC states that you can't circunvent DRM, but since you must be able to exercise the copyright exceptions, it states that in those cases you have to request the means to achieve your objective to IGAC (a state administration service). The problem is that if you request those means to IGAC, they won't hand them over to you because they don't have it.

Well, that is now going to change. Two Portuguese parties submitted to the Parliament a couple of bills with the same basic objective: to change CDADC, changing the way the law ensures the right to copyright exceptions by simply stating that if the DRM in question prevents any of those exceptions from being exercised, then you can circunvent them in order to exercise them. Simple and effective, right?
These two bills were debated in the parliament, and then approved in generality. Now they follow it's natural path, to a comission that will merge both bills and do amendments (amendments that will not change the essence of the bills, I hope), and the final text will be again voted in the Parliament, who can turn it into Law, finally giving back users the rights that were taken from them nine years ago.