One awsome year has passed. The next one will be even better.

Some people are doing one of two things: asking me if I don't have a twitter account or why am I blogging less. For those, here's my friendfeed, where you can keep track of some of my online activities.

OpenSim has now its 0.5.1 version. There's a great post about OpenSim's evolution here.

Lately I've been spending a lot of time preparing Merankorii's fifth album "A Viagem". It will be released this month (no release date set yet) in a really limited edition of 30 CD's. If you want to pre-order it, hurry up because it will sell-out pretty fast. The price is 5€ (shipment included). Also, Merankorii's third album "Melencolia III" can now be aquired in mp3 format for the price you choose, between $1 and $20. 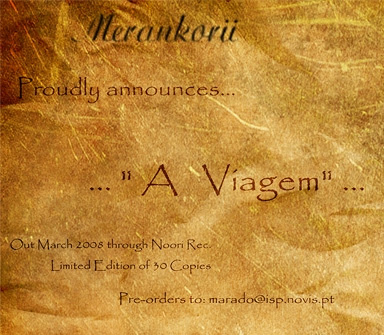