They didn't want to believe in the old writtings, they said it was talling us religious myths, not history.

But now, an archaeologist stumbled on 2,000-year-old Mayan beautifull mural: 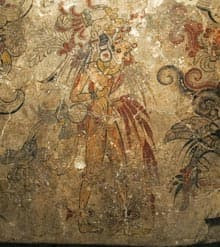 Quoting The Guardian:
The main nine-metre (30ft) wall of the mural shows the son of the Corn God creating the Mayan mythical and physical world. In one scene he offers up a fish and establishes the watery underworld, in another he sacrifices a deer and creates the earth. In a third he floats in the air holding out a turkey to make the sky, while in a fourth he is surrounded by the blooming flowers of paradise. Other sections depict the Corn God's birth, death and resurrection, and establish the principle of divine kingship with the Corn God crowning himself, and the first human king claiming his earthly crown from the surrounding deities.

"It's the equivalent for the Maya of the Biblical account of Genesis, but it's more than that because it provides a link between the gods of creation and the Maya kings," archaeologist Francisco Estrada-Belli of Vanderbilt University, who was not involved in the find, told the Los Angeles Times.

Mr Saturno said he guessed the chamber may have functioned as a rehearsal room where Mayan kings could learn the mythology for public ceremonies. The discovery nearby of a royal burial site dated to 150BC fuels the idea that Maya civilisation evolved much earlier.